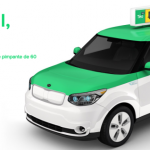 Clean electric Téo taxi will be coming to Montreal in coming years following its investment in the city. 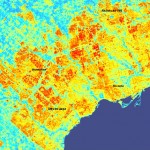 Climate change, in combination with the urban heat island effect, is expected to exacerbate current warming trends in urban areas that will impact human health. 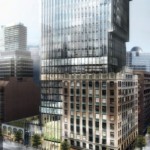 An artist’s rendering of the new Exchange tower – a LEED-certified project in Vancouver that was integrated into the restored Old Stock Exchange building. Canada and Vancouver in particular have been recognized for leadership in green building.

That future—one that makes use of digital technology, citizen-sensors, and open data to manage urban areas more sustainable—may already be here according to some experts. In coming years, the company Téo taxi will bring the first fleet of electric taxis to Montreal’s streets while Hydro Quebec has also begun work to bring thousands of electric charging stations to the province of Quebec.

Globally, changes triggered by digital technologies and open data have already begun to impact how city leaders make decisions and engage with communities on environmental issues. One outcome of these new mediums for exchanging information has been enhanced capacity of cities to use citizens and resources to strategically tackle issues such as climate change.

“I think it will be a noticeable difference on the streets of Montreal when you walk out and you see the white and green Téo taxis you know all through the downtown core,” said Geothink researcher Alexander Aylett, a professor and researcher at the Institut national de la recherche scientifique. “You know we’re talking about a really large pool of electric vehicles. And the shift is an environmental one, but it’s also a social and a cultural one where people start to have direct experience with electric mobility. It will be really profound.”

Aylett noted that 40 percent of Montreal’s greenhouse gas (GHG) emissions derive from moving people and things around the city. Efforts to scale-up the ability of cities across Canada to manage and change truck, car, and train traffic is one of several goals city leaders across North America are pursuing, he added in a recent interview with Geothink.ca.

The City of the Future

City leaders around the world are aware that municipalities themselves only control a very small percent of the urban infrastructure that directly and indirectly can lead to environmental damage. Cities also cause environmental damages well beyond their geographic scope making it more difficult for them to reduce impacts. Consequently, solutions that rely on taxation or legislation may have limited ability to dramatically shift the myriad social behaviors tied to environmental issues like climate change.

Take, for example, the urban heat island effect. Described by scientists, it concerns the process by which urban surfaces absorb more solar energy and re-admit it as thermal energy (primarily at night) than do surrounding non-paved areas. Better modelling of local and regional climatological processes using citizen sensors can allow cities to pin-point which neighbourhoods are most susceptible to this problem and plan strategically.

Technology may also one day revolutionize how environmental issues are managed locally. The release of open data on neighbourhood energy consumption, water use, and waste disposal make it possible for cities to work with the private sector, non-profits, and academics to better manage flows of materials, goods, and energy in urban areas. Researchers sometimes call such measurement work “urban metabolism.”

“All of those things are being enabled in a way that we’ve never seen before by new technology,” Aylett said. “So the output is becoming a much deeper understanding of how our cities function and the impacts that they have. And where, if you want to think about it like acupuncture, where you can take strategic action in one space that will cause sort of systemic shifts in those impacts.”

He added that visualization and cartographic technologies now make it possible to take information that’s quite complex and make it understandable even for non-experts. What’s more difficult to assess is how such technological tools make possible collaborative action that builds around specific issues as they spread through a community.

Individual cities around the world have shown international and national climate change negotiators what’s possible in tackling climate change mitigation and adaptation, according to Aylett. This despite the inability of some provincial/state and federal governments to incorporate and engage with such local solutions, he added.

Yet much work remains. In an inventory of the open data portals of 20 of the largest Canadian cities Aylett completed last summer, he determined that things like parks and green spaces are well represented while others such as energy consumption or air quality are entirely absent. Aylett hopes the addition of such data will increasingly play an important role in urban environmental management. But it’s still “early days” for this type of open data, he repeated often during the interview, noting that researchers in public health could make a similar complaint.

“So far cities in Canada are not providing on their open data web sites the basic ingredients for innovation around urban sustainability or for you know effective action within the municipality,” he cautioned. “There is a lot of good data that cities have that so far hasn’t been made available. And what that means—it’s a negative and it’s a positive. It means that there is huge potential for the cities that decide to be strategic about it to lay the groundwork for a really interesting period in municipal policy making, and innovation, and experimentation here in Canada.”

Stay tuned for our audio podcast with Alex Aylett to hear him talk about cities and international solutions to climate change as well as how new technologies shape interactions in neighbourhoods and between neighbours on environmental issues.

Also tweet him at @openalex_ and check him out at Open Alex.